• "Claude's score was subtle and highly emotive and added a lot of depth to the viewing experience. He was a pleasure to work with in a spirit of close collaboration between director and composer and I'm looking forward to doing it again." - Peter Mackenzie 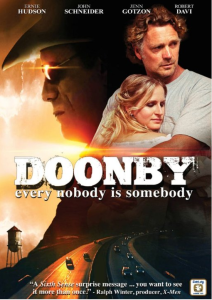 Sam Doonby, a mysterious and handsome drifter, steps off an interstate bus and quickly becomes the talk of a small Texas town. After finding work at Leroy’s Country Blues bar, his musical talents make him a small-town star, attracting the attention of Laura, the beautiful but spoiled daughter of local doctor Cyrus Reaper.

Sam seems to always be in the right place at the right time to prevent disasters from happening in the town. Before long, jealousy and suspicion drive the townspeople to question his sudden arrival and motives. Finally, when Laura begins to doubt him as well, he disappears as quickly as he materialized. Soon, everyone realizes that there was more to Sam Doonby than they understood, especially Cyrus and his family as the doctor’s past comes back to haunt him.

Sam Doonby is a drifter who comes to a small town and finds a job as a bartender at a local bar. In the short time he is there, he winds up becoming involved in many of the towns-folks lives. The impact he has is life changing in many ways as he saves many from harm or even potential fatal outcomes. However, little is known about this mystery man. When the police eventually become involved, they can find no record of his existence.

This film is a gripping mystery/drama that will have you wondering just who Sam Doonby is. Whenever he is asked, his answer is “I’m nobody really.” The film has a message and purpose that we won’t get into here so as not to plot spoil. However, we want you to be aware that the film does carry some rough situations and this is not a film for children. Adults will be moved by this compelling story and we are awarding “Doonby” our Dove “Faith-Friendly” Seal for ages 12 and over.